The cost of electricity is significantly increasing this year, with some ratepayers paying as much as double the normal price for the same amount of electricity. The rise in costs is driven by the increased cost and restricted supply of natural gas due to escalation of Russia’s prolonged invasion of Ukraine. Natural gas makes up over half of New England’s energy, compared to just 38% nationwide. Our dependence on natural gas, and the resistance from the Massachusetts Department of Public Utilities (which oversees utilities and approves rate increases), ISO-New England (a regional body that oversees the production and transmission of electric power throughout New England), and utilities such as Eversource and National Grid to shift toward renewable energy is why our electricity bills are skyrocketing this winter. The significant rise in costs is causing some to question: what are we even paying for, anyway?

The makeup of your electricity bill is split between Supply and Delivery. 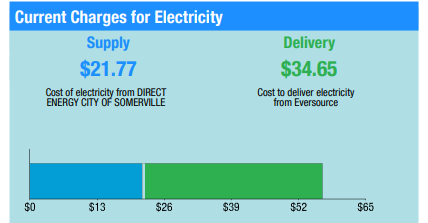 The “Supply” side of your electricity, which typically makes up a quarter to half of your bill, is what you typically think of when you think of your electricity expenses–the cost of the actual electricity consumed. Utilities purchase energy from suppliers (such as power plants) and bring the energy into substations, which are then rerouted to local grids and homes. The cost of the electricity you use is determined by how many kilowatt-hours (kWhs) you use. One kWh is equal to 1,000 Watts being used for 1 hour; for example, a 100-Watt light bulb left on for ten hours would use one kWh while an air conditioner used for 8 hours typically uses 10 kWhs. For each kWh consumed, you pay a certain fee determined by agreements between the supplier and the utilities, approved by the DPU. For example, a resident of Eastern Massachusetts whose power is supplied by Eversource will pay 25.65 cents for each kWh consumed (an increase from  17.87 cents in the second half of 2022). However, these rates are highly variable across and within states and most utilities re-set their rates twice per year based on the amount of electricity used and the difficulty to supply users with their needs. In addition, consumers can determine the rates of their supply based on Massachusetts’s competitive market for residential electricity consumers, which allows consumers to choose where their energy comes from. This system is often marketed as creating the ability for suppliers of electricity from renewable sources to outcompete suppliers of energy from fossil fuels, but has also led to exploitation of consumers and calls for its ban.

State laws have mandated that certain minimum amounts of energy come from renewable sources (20% in 2022, increasing to 40% by 2030). While renewable energy will eventually drive costs of energy down, at the moment much of those savings are going to those who can afford solar panels, heat pumps, and other infrastructure.

Utilities claim that they make no profits off of supplying electricity; instead, they make their profits off of the “Delivery” part of your bill, which typically makes up half to three quarters of the bill. In this part of your bill, you’re typically paying for the cost of getting electricity from the supplier to homes and businesses through transmission and distribution. Prices for these parts of your bill are set by state regulators in agreement with utilities based on estimated costs of delivery. For example, the Customer Charge is a fixed monthly fee that covers costs related to billing, meter services, customer service and personnel.

In addition, this part of your bill includes a number of small charges for policy initiatives, such as the Distributed Solar Charge or Renewable Energy Charge. For example, the Energy Efficiency charge funds Mass Save–the program administered by the utilities that offers rebates and loans for energy efficient appliances and weatherization. The number of these charges has been increasing over time, with about 20% of the typical electric bill contributing toward state-mandated programs, which has little to do with how much energy is actually being used. Although energy usage might be higher amongst those with higher income, the rates for which customers are footing the bill are unfortunately equal across all income levels.

While much of these charges cover the state’s renewable energy goals, don’t be fooled into thinking utilities or the DPU are themselves pushing for renewable energies. These are often set into law by legislatures thanks to activists pushing for greener policies, despite the active opposition from both utilities and the DPU. As environmental activist Joel Wool shares, “The MA DPU has actively opposed efforts toward social and economic equity, rejecting energy efficiency incentives intended to bridge socioeconomic divides and throwing up roadblocks to solar access.”

Utility companies also receive remuneration for carrying the supposed risks of the state’s renewable energy contracts despite rate-payers covering the costs of the renewable energy itself. For example, DPU gave $168 million to three utilities over 20 years for the Vineyard Winds project, which makes up about 2.75% of the typical energy bill. Almost all customers will foot the bill for these costs. The customers that will avoid these costs? Those in cities with municipally owned utilities, which typically are able to avoid regulation from the DPU.

Utilities and the DPU have set up a complicated system that often obscures what consumers are paying for and upholds the current power structures that benefit utilities and traditional energy providers. Because of this, it is up to the legislators and those that elect them to hold utilities and fossil fuel providers accountable for their resistance to change and advocate for democratizing, decarbonizing, decommodifying, and decolonizing our energy system. In future blog posts, we’ll talk more about why rates are increasing, the responsibility of the DPU, and what you can do to advocate for change.